What to Do After a Death

What Should You Do After the Death of a Love One?

125 Tasks After a Death Has Occurred

B. Pay Some or All of the Following

D. Decide and Arrange Within a Few Hours

Need more information or help?
Please contact us at info@funeralresources.com

Protect Your Family Against Grave Robbers

Protect Your Family Against Grave Robbers

It’s no surprise that identity thieves are running rampant, however it’s a shocking fact that these scammers are using the personal information and vital statistics of more than 2,000 deceased people every day. An ID Analytics study recently revealed that the misuse of social security numbers belonging to the deceased occurs more than 1.5 million times every year. Are the identities of your deceased loved ones protected from these identity thieves?

In the same way people provide protection for their families using funeral insurance to cover funeral costs and burial expenses and replace lost income after a death, many people today are also taking additional steps to ensure their loved ones left behind aren’t abused by scam artists.

Be proactive to protect your family. Take the proper steps to provide protection against identity theft while you are alive. Enroll in a service like LifeLock.com to monitor credit reports and inquiries, applications for utility and wireless service, and many other aspects of personal information to reduce the risk of exposure. Monitor your online bank activities, guard your social security number and private information, and keep your digital devices protected with reliable security software to deter fraudsters from gathering your personal data and vital statistics.

Coping with the loss of a loved one is emotionally and physically challenging for most people, and on top of the grief, it often takes weeks, or even months, to notify creditors and vendors after someone dies. Unfortunately, scammers and identity thieves get started immediately after they see perform an obituary search or read a newspaper report that announces a death.

Assign a friend or relative to take charge of reporting your death immediately. Or consider hiring a funeral estate planning attorney to handle all notifications. Recommendations from AARP.com include contacting the Social Security Administration (1-800-772-1213), sending death certificates to the three major credit reporting agencies—Experian, Equifax and TransUnion—and asking financial institutions and creditors to mark accounts closed due to death. The IRS should also be notified as soon as possible to prevent fraudsters from filing for a tax refund with the deceased person’s information or claiming the deceased as a dependent on future returns.

The best time to consider identity theft is before it happens. Make sure you create a love drawer with a list of everyone—businesses, government agencies and individuals who have access now, or might have acquired your information in the past. Include medical providers, lawyers, the IRS, the Social Security Administration, banks, creditors and even your landscape and pest control contractors.

Prepare a simple form letter that informs recipients of your death in advance. Assign someone to mail these letters, preferably by certified mail, immediately after your death. Ask your designated helper to cancel your voter registration card, drivers license and online social media accounts (learn more about digital estate planning).

Work With the Credit Bureaus

The credit reporting agency Experian advises that credit bureaus periodically update records with information received from the Social Security Administration to flag files when people pass away. It could take up to six months for the information to be transferred so, having someone designated to report the death is preferable to waiting for agency notification. To protect against fraud, survivors should request credit reports every few months after a loved one passes to be sure no one is trying to assume the deceased identity. 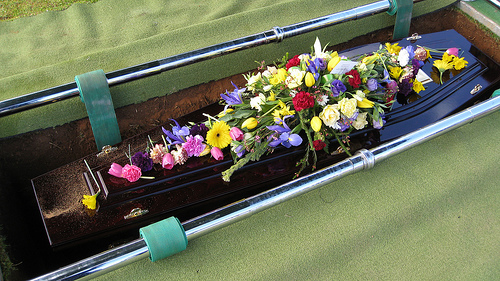 Our Personal Gift to You and Your Loved Ones…

4 FREE Guides to Creating a Smart End of Life Plan

(Note: You can download, print, or save each guide below at NO COST)

Please Watch This Brief Video About Creating Your End of Life Plan:

• Benefits of keeping all of your financial affairs in one place

• A complete list of key matters to have readily available

• Who can access and how often to update this information

2. Guide to Knowing Your 3 Best Options to Pre-Pay Funeral Expenses:

• Pre Need Plan – How this plan works, who it fits, pros and cons

• Final Expense Plan – How this plan works, who it fits, pros and cons

3. Guide to Choosing a Will Versus a Trust:

• The importance of creating an estate plan and how to start

• Easy-to-understand difference between a Last Will versus Living Trust

• Helpful ways to determine which is one is best for you

4. Guide to Creating a Love Drawer:

• Benefits of keeping all of your financial affairs in one place

• Who can access and how often to update this information

See Exactly Why a “Love Drawer” is So Valuable For EVERY Family: