One of the most innovative and cutting-edge memorial technology tools is a memorial spaceflight.  Memorial spaceflights provide the opportunity for your loved one to experience space and be forever immortalized above earth, on the moon, or in deep space.

In the case of an orbital memorial package, your loved one’s cremated remains will orbit the earth from 3 weeks to 2 months, before its orbit naturally begins to reenter the atmosphere. This occurs at very high speeds and temperatures causing the satellite and its contents to become a trail of ionized gas, also known as a shooting star.

Orbital Memorials provides a low-cost entry point into spaceflight memorial services. In addition to hosting an online store for all services, making purchasing services easy, they include launch updates and a memorial package after the flight.

This memorial package includes a permanent keepsake replica of the pod sent to space, space flight tickets with the launch date, and a space flight patch.

The Business of Death

Around the world, every day, every hour, every second, medical treatment is unable to prevent death. When doctors, nurses and hospitals can do no more for a patient, another industry steps in.

There are bodies everywhere.

The two most common methods for the disposal of corpses are:

Today, the average North American traditional funeral costs between $7,000 and $10,000.

• Muslims try to bury their dead ASAP.
• Family or community members wash and shroud the body in scented water and clean white cloth.
• The body is positioned so that the head is facing Mecca. The average adult Islamic funeral, before the cost of burial, was $6,550 in 2009, according to the National Funeral Directors Association.

• The traditional Tibetan Sky Burial involves a corpse being dismembered by trained professionals and left outside (in one of the 1075 sky burial sites) for animals to feast upon. Today, 80% of Tibetans choose to have Sky Burials.

Green Burials in the U.S.:

• Going “Green?” People are forgoing traditional methods for environmentally friendly burials.
• Why expose the Earth to unnecessary embalming chemicals or steel caskets.
• Opts for biodegradable caskets or having your remains turned into an artificial reef? Factoid: Americans currently bury around one million tons of steel caskets each year.

• Balinese cremation ceremony is performed to send the dead onto their next life, and is considered a sacred duty.
• The dead are placed inside a coffin, which is then placed inside a structure resembling a buffalo or temple.
• The structure is carried to the cremation site and set aflame. In group ceremonies upwards of 60 people’s remains were cremated at one time.

• In Ghana it is popular to bury loved ones in coffins that represent certain aspects of them, generally either an occupation, or something they loved.
• For example, a farmer might be buried in a coffin that was built to resemble an ear of corn, or a businessman could be buried in a coffin resembling a plane.

Famadihana – The Turning of the Bones:

• The Malagasy people of Madagascar have a famous ritual in which every five to seven years, the family has a celebration at its ancestral crypt.
• The cloth-wrapped bodies of the deceased are exhumed and sprayed with wine or perfume, before being brought out for family members to dance with while a live band plays.

• Originating over 1000 years ago, Sokushinbutsu was practiced by a sect of Buddhist monks, and resulted in self-mummification.
• Process that involved eating nuts, bark, and drinking poisonous tea, and took over 3000 days to complete.
• Though hundreds of monks tried, only 16 – 24 were successful.
• Sokushinbutsu is now illegal in Japan.

• Though now a long lost civilization, The Bo people of the Hemp Pond Valley in Southwest China’s Gongxian County, would use two wooden poles inserted into the rock to suspend caskets containing the dead on high cliff faces.
• Over 160 coffins were placed along the cliffs and natural caves. Today locals refer to the Bo as the “Sons of the Cliffs”.

• Now banned in India, Sati was the practice of recently widowed women throwing themselves on the funeral pyres of their husband’s bodies.

Contributed by “The Business of Death“

The Key Differences Between

Commonly known as green burials, eco-friendly burials, natural burials, or woodland burials, there are distinct differences between a traditional burial and a green burial.

Green burials do not employ the use of embalming fluids, pesticides, herbicides, or irrigation.

Bamboo, wicker, cardboard or wooden caskets are used instead of metal caskets.

Concrete burial vaults are not used for a green burial.

The graves are usually hand-dug and are shallower than with those used in traditional burials.

Graves are marked with more natural landmarks that blend in with the area such as plants, rocks, trees or flowers.  Elaborate and prominent headstones or grave markers are not used in a green burial.

A Green Funeral Can Help Save the Environment 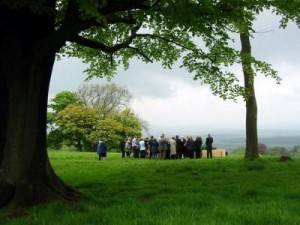 Opponents to the traditional funeral homes view them as being more wasteful than green funeral providers citing the use of toxic chemicals such as formaldehyde in embalming fluid as unnecessary and damaging to the environment. To plan a funeral traditionally, this consumes enormous amounts of materials such as steel, concrete, copper, and bronze.  The figures are in the tens of thousands of tons annually.  During a burial, these elements remain in the ground indefinitely, polluting the earth.

Each year, cemeteries across the US bury approximately:

Today a green funeral is a new trend that is emerging in the death care industry.  Green funerals, or environmentally-friendly burials, do without the use of artificial preservation methods and materials that may be harmful to the environment. By using minimalist caskets and grave markers, and natural habitats, this types of burial cost is a fraction of their traditional counterparts.  Green burials promote harmony with nature and protect mother earth.