In response to the overwhelming number of families losing loved ones to the COVID-19 pandemic, Funeral Resources.com and MemorialTechnology.com provide COVID-19 families with the awareness, education, and access to some of the funeral industry’s newest and most innovative memorial technology tools.

Chris Hill, Founder says; “With a national shutdown in place, COVID-19 families and the death care industry are both facing the most devastating funeral planning challenges in the history. Not only are there extreme limitations on accessing traditional funeral planning needs like funerals, visitations, wakes, memorial services, but to make matters worse, lots of stress and pressure to afford the significant costs and expenses of losing a loved one.”

Not only is there an abundance of free information, answers, and support available at these family-focused online resource centers for COVID-19 families, but also access to new memorial technology tools.

“After losing a loved one, my loss became an inspiration to help families make these difficult situations easier. Given the COVID-19 crisis facing families today, we felt compelled to serve as the hands and feet of Christ. We knew God was calling us to find a way to come together and do something special…at a time when families need it most”, explains Christopher P. Hill, Founder.

A Few Words Before I Go

The original Rosetta Stone helped translate the pictorial language of the ancient Egyptians, providing definitions of the imagery and bringing to life a long-gone culture. Now one company is offering personal versions of the stones to tell stories about an individual long after we’re gone.

Objecs LLC’s RosettaStone is an oblong — think full-sized iPod – piece of granite or travertine stone inscribed with pictorial images that stand for different aspects of an individual’s life. Seemlessly incorporated into tombstones and monuments, the stones invite cemetery visitors to plug into a website – or in some cases simply wave your phone in front of the stone – and see the meaning of each symbol.

“Walk around a cemetery today and gravestones doesn’t tell you anything. Date of birth. Date of death. They’re cold and impersonal,” said Chris Hill, a financial advisor in northern Virginia and also Founder of FuneralResources.com, who personally owns two RosettaStones. “This will tell my story for thousands of years.”

Purchasers can choose up to six tablet symbols, reminiscent of hieroglyphics, from more than 300 options, including a striped pole for a barber, a caliper for an engineer, and a man behind bars for ne’er-do-wells who want to be remembered as such.

When selecting the symbols for his stone, Hill thought of his wife and two children, his passions for music and writing, his belief that life doesn’t end with death.

For his six symbols, he chose an “I” for general information, a U.S. map, stick figures representing a family, a music note, a hand holding a pen, and a telescope looking into space.

“It’s just as important to document your life as it is to remember it”, Hill said. 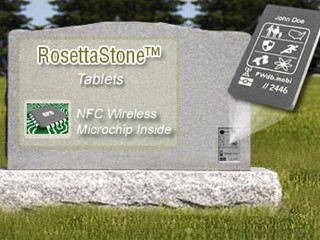 “When I see someone using a symbol I can relate to, I can’t help but be curious as to their life experience around it. We are seeing mini-meaning of life stuff here from common people, not a Dalai Lama,” Bottorff said. “I will never look at a barber pole symbol the same – I’m still awestruck at how a barber has learned the deepest values of life from his profession.  Not all of the messages are positive, but I think they are all gifts to future generations from today’s cooks, barbers, lawyers, fishermen and all kinds of people and professions.”

But it’s the memorial technology element that makes the RosettaStone special, Bottorff said. If the cell phone is NFC-enabled — something still rare in North America but common overseas – simply touching the phone to the tablet allows direct access to the story behind each symbol. The internal microchip uses the phone’s own magnetic field to work and transfer the data, then returns to a dormant state.

For a regular cell phone with Internet access, users can type in the web information on the tablet and have the same information appear. Each symbol can be accompanied by about 200 words of text.

So how is this better than including a memorial website’s address on a tombstone? The answer is permanence, Bottorff said.

“Compare us to them and we look a bit primitive, he said. “The traditional memorial website is a much richer multimedia experience, but  not necessarily pursuing the long-term data survival  model we are. If you’re interested in a long genealogical surviving record, ours is a pretty good approach.”

Introduced a little over a month ago, Objecs has sold fewer than 100 of the products, which cost about $200. Among the buyers, Bottorff said, are a well-known American musician and a BBC Television personality.

Although Objecs initially offer for the product was a way to honor the dead, the living have quickly wanted it for themselves too. (In fact, the living are the product’s primarily buyers thus far.) On its website, Objecs notes that RosettaStones are also intended for “mature adults who have reached a stage in life with identifiable milestones and associations. Such milestones may include a profession, discipline, paternal capacity, love of music or skill….”

“When people started buying it for themselves, it was an awakening that it was something people wanted to hold onto as a family heirloom, so we adjusted our message,” Bottorff said.

Hill has been updating and frequently rewriting the text he wants to accompany his RosettaStone entries frequently.

“If a truck hits me tomorrow, I’ve got some words that will last forever and that’s real,” he said. “It’s hard to write at first. You’re thinking, ‘Wow. These are my last words.’”