In the United States, a military funeral is a carefully choreographed memorial service given by the Department of Defense for all Veterans, including a soldier who died in battle or other military figures or heads of state.  It incorporates many military elements such as the firing of volley shots as a salute, honor guards, the ceremonial U.S. flag draping the coffin and military burial.

While making funeral arrangements is a difficult and heartfelt task, the military funeral takes on a deeper meaning for those involved.  It is an event that stays with the families and friends forever.

How to Arrange a Military Funeral 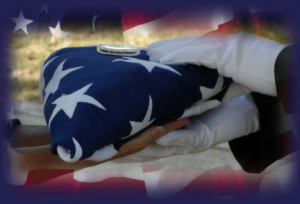 The U.S. Department of Veterans Affairs, formerly known as the Veterans Administration, sets the rules and guidelines for military burials.  All U.S. veterans are eligible unless dishonorably discharged or charged with a capital crime.  Certain positions within NOAA and the Public Health Service are also eligible. You can confirm your eligibility for military burial and memorial benefits by calling a veteran’s benefits counselor at (800) 827-1000.

Contact the Funeral Home or Cemetery of your choice to make the arrangements.  Most Funeral Homes or Cemeteries are familiar with organizing military funerals and will know who to contact.  For extra assistance, many military social organizations can assist with military burial details.

It is imperative that you take the deceased’s official discharge papers with you to the funeral home. Veterans sometimes keep a laminated copy in their wallet or in a place of safekeeping.  If you are unable to locate the papers, take any information you have, such as dates of service, rank, branch of service, place of service, and service number.  The funeral home can assist you with the completion of any paperwork.

For a National Cemetery, contact the Commander of the local service organization for your specific military branch to discuss the grave marker and any financial assistance available.  Other organizations available to you are VFW, AMVETS, or the American Legion.